A not so hearty welcome

The Wimp-in-Chief  made a trip today to Roseburg, Oregon  to try to leverage the evil tragedy of a loser who killed 9 innocents at Umpqua Community College last week into support for an authoritarian state.

The audacity of mope of this clumsy ass-clown's fumbling efforts to exploit their loss - while likely trying to divert attention from his utter failure to productively lead the USA either domestically or in international affairs - was not lost on the people of Roseburg.  Some 250 protesters rebuked the POTUS, many with signs denouncing his naked ambition to infringe the Second Amendment. 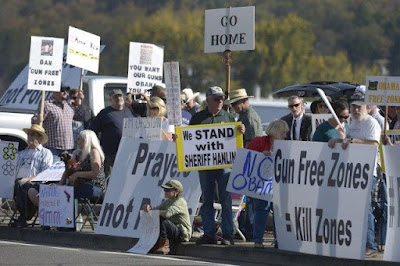 Some there chided the President, for his seeming indifference to the death toll din that continues unabated in his previous hometown of Chicago.

Still, that's not to say there weren't also supporters.  It appears, though, that in so doing, they at least had the decency to hang their heads in shame. 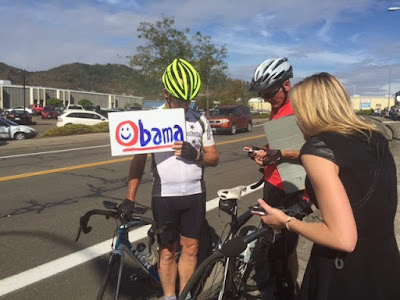 You just knew they'd be in Spandex, didn't you?

Hard to believe he's been gone already a dozen years.

Even though Zevon penned the title tune to Linda Ronstadt's best album ever, it probably wasn't until this century that I actually listened to his version.

I've had her version on my phone playlist, but it's low recording level/EQ doesn't reproduce well through my Bluetooth stereo speaker on bike rides, so I recently added this version, which I've found I like quite a bit:

Another trivia bit - Perhaps I knew this before but had forgotten, but the other musical personnel on Zevon's Werewolves of London were none other than Waddy Wachtel (guitar), and Messrs. Fleetwood and McVie on drums and bass. Wachtel also played guitar on Linda's version of Hasten, and has been lead guitarist on all of Stevie Nick's solo albums.

Posted by an Donalbane at 12:11 PM No comments: