Naomi and Eli move to Utah

OK, so moving right along. Elimelech and Naomi were looking for some cool trails to test their FJ-40 - the Bethlehem Mudders Club wasn't working for them, so they loaded up the truck -

I'll pull back now, and maybe read the book of Ruth, not quite so creatively.

Here's what Brandon has to say from the book of Ruth:

My prayer for you is that you'll receive the blessing you need, just when you need it.
Posted by an Donalbane at 7:11 PM No comments:

OK, does taking a selfie with a classic guy count for introspection? 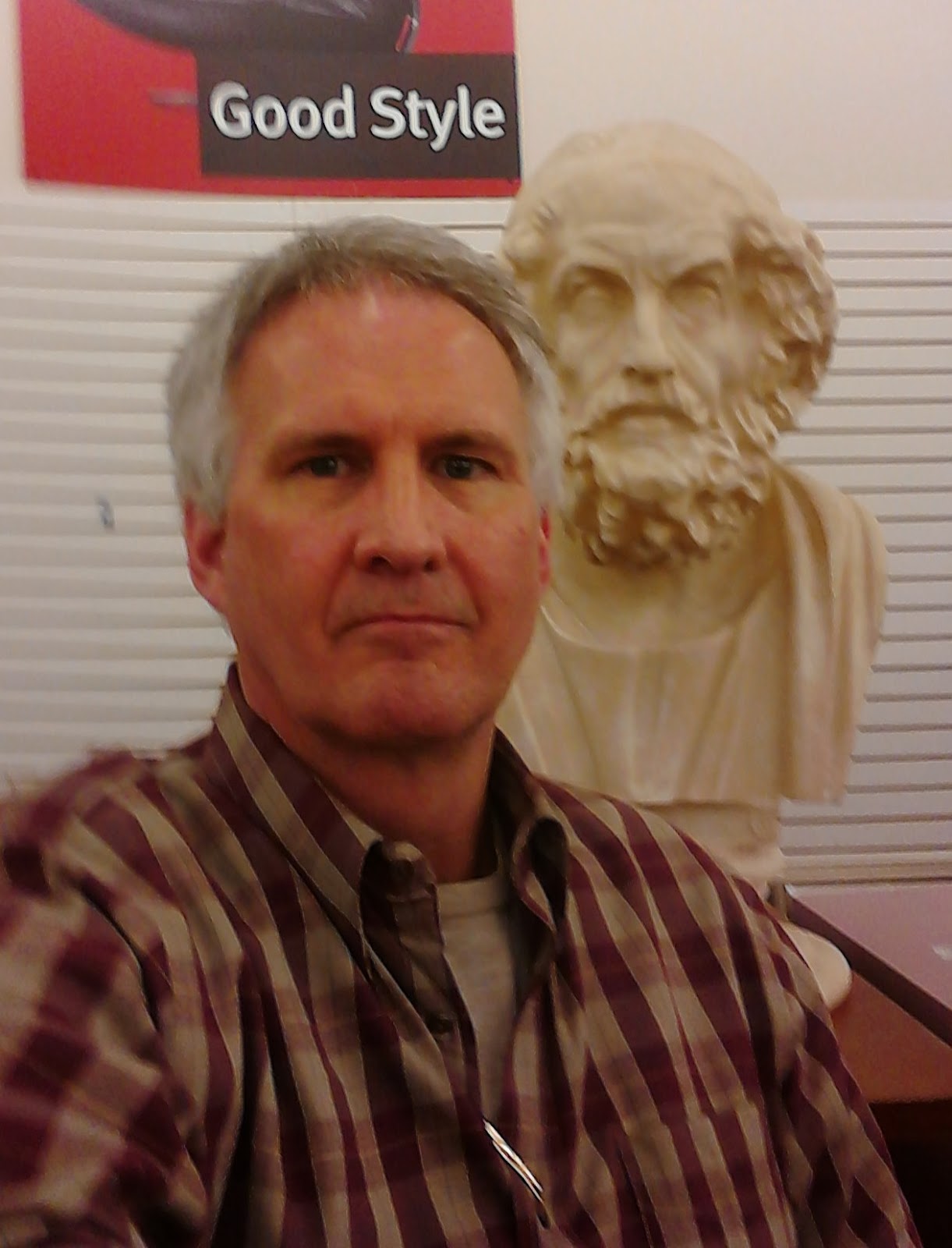 Pliny the Eldest with Homer

At least I think it was Homer - without his orange smock, it was hard to tell.  And most of his old InstaMatic snapshots didn't hold up very well on the internets.

I was particularly hoping it would've been So-crates, 'cause I really liked his work in Bill and Ted's Excellent Adventure.

I don't think Jim said it that way...

King James, that is - with apologies to Waymore.

The Pastor at my church is always encouraging the congregation to read the Bible (so, right off the bat, you can tell we're not Catholic).  Additionally, he advises to read it with a sense of imagination.

So, our recent series, being in February and all, is themed on couples - you know, the whole romance angle.  Not surprisingly, the first first family, Adam and Eve, figure prominently.  And, after hearing a term in the sermon that I, uh, never have thought I'd hear in a sermon, I took up the challenge, and reframed Genesis Chapter 3.

"Adam, what in the world are you doing?"

"You're what?"  You know you're in the part of the Garden I told you to keep out of, right?

"Adam, is this going to be a long story?"

"Are you in a hurry?  I mean - you are omniscient and omnipresent."

"Yes, that's true, but The Creator of the universe has got a lot on the old Outlook calendar today. I may not have any limits, but I do have standards.  Please, get on with the story."

"I'll, uh, try to keep it brief.  You know how you had said I should have dominion over all the earth and stuff?  So, I went out to Colorado to try out a new, super sweet .280 Remington - Circassian Walnut stocked, on a pre-'64 model 70 action. Pretty cool, huh -"

[Interrupting] "What ammo did you use?"

"Yeah - bagged a nice 6x6 - but I was by myself, naturally, and it was a ton of work quartering that beast and packing out, and I got plumb exhausted and took a deep nap -"

"Well - actually that was my doing."

"For real?  OK - anyway, when I woke back up there was this super hot hippie chick, beautiful flowers in her hair and all - and she was naked."

"Again, that was my work - thought you could use the company."

"For sure.  She was pretty wicked awesome at first - I'd never seen anything like that - and we were really groovin' and stuff -"

"Adam, you're getting off track - again - and you still haven't told me what manscaping is, or why you disobeyed me."

"Oh, right.  So, I'd just gotten back from hunting, and there's Eve - like you said, you created her for me - and wow, she was great!  But hardly any time at all, she's starting to go all PETA and Euell Gibbons on me and stuff, nagging and telling me to eat healthier and everything.  She said I needed more fruit in my diet.  And she said she knew where we could get some."

"But I told you to stay out of there!"

"I know, I know.  She said we'd just go over there and grab a little basket of fruit, and then we could get busy and populate the earth, just like you'd instructed us. I figured it would keep the peace in the Garden. And she was naked, remember?  What guy wouldn't have done the same?

"There are no other guys, Adam."

"OK, can you wrap this up? I created the universe and everything in it in six days - but it's approaching eternity to get a simple answer from you."

"So we ate the fruit, and she's instantly 'I don't have a thing to wear', and I also noticed I was just in my birthday suit and started running around looking for fig leaf to wear.  Only it was early in the season, and the fig leaves weren't so large, you know, and I had to manscape to keep from looking like a weirdo."

[Walking out of the Garden, shaking his head] "I'm gonna write a book someday..."


Now, I've taken Brandon's admonition to read the Bible imaginatively to a whole 'nuther level, maybe not what he - or Ol' King Jimbo - had in mind.  The following is what was really in the sermon - but, I promise you, he did mention manscaping¹, though not quite as creatively.

In a serious vein, the video does have good advice for husbands...and wives.

Clicking on the video will make it full-screen.

Wonder what Pastor Todd has to say on the subject?  He did recently mention thinking on "homosexuality, marriage, holiness, divorce, animals, Heaven, Hell and even hair", so anything's possible, I suppose.

But I'm thinking that the sound of my phone not ringing is LB Christ Fellowship not calling to offer me the permanent guest Pastor gig.

So, like at least a couple of hundred other Americans - and some lonely dude in Saskatchewan - I spent Sunday evening watching the Tiffany network's 50th anniversary tribute to four Liverpudlians' taking the Ed Sullivan show by storm.  A two-and-a-half hour respite from the typical crud on that frequency, Kenneth.

I don't think I owned a Beatles album until I was about 17 (about 8 years after they'd disbanded), and even then, it was one of the 'greatest hits' compilations. I'm not sure to this day if I have a copy of Sgt. my Sgt. Pepper's Lonely Hearts Club Band.  But, nonetheless, it's impossible to be unaware of the impact these four made on American music and culture.

In a Six Degrees of Combat Kevin Bacon sense, I feel like I practically know Paul and Ringo. I mean, surely you noticed the slightly built house band guitarist, with short cropped white hair, on the tribute.  Yep, my buddy Pete.  As in Frampton.  Me and Pete met about 11 years ago at Virgin Records in Grapevine Mills Mall - I've got the inscribed FCA double LP cover to prove it.  So there's that.

Then, I've also got inscribed CD covers "Happy Birthday, Don!" of Greatest Hits 1971-1975 and End of the Innocence. signed by another Donald from another mother.  Of course, he's in a band with ordinary, average guy Joe Walsh - brother-in-law of Richard Starkey.  So, I don't know how I could be much closer to the Fab Four.

Unless I was Clarence Walker:

Yeah, I know - I'm not part of a couple.  But Pastor Brandon noted that the series is applicable even to those unattached of us - who aspire not to stay this way forever.

And did Pastor Brandon during the sermon refer to the act of bringing together a man and wife as 'mawiage, mawiage'?

View the video to find out.

As Combat Kevin warns - Zombies be all around us.  I saw this one lurking on the rear window of an SUV near the local Big Lots: 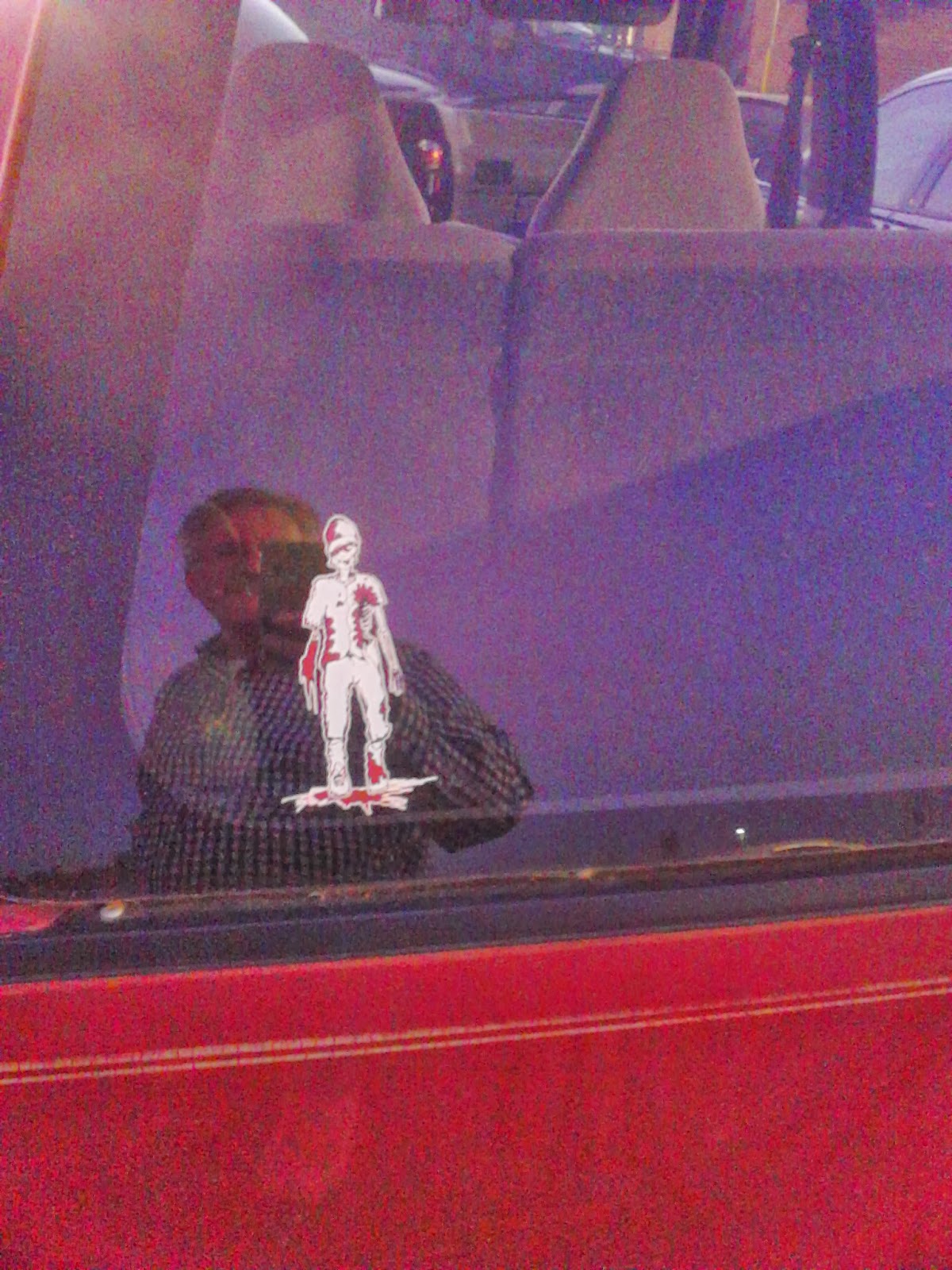 In the event you're prone to sleeping out-of-doors at times, consider a little Zombie medicine inside your green fleece Ozark Trail sleeping bag: 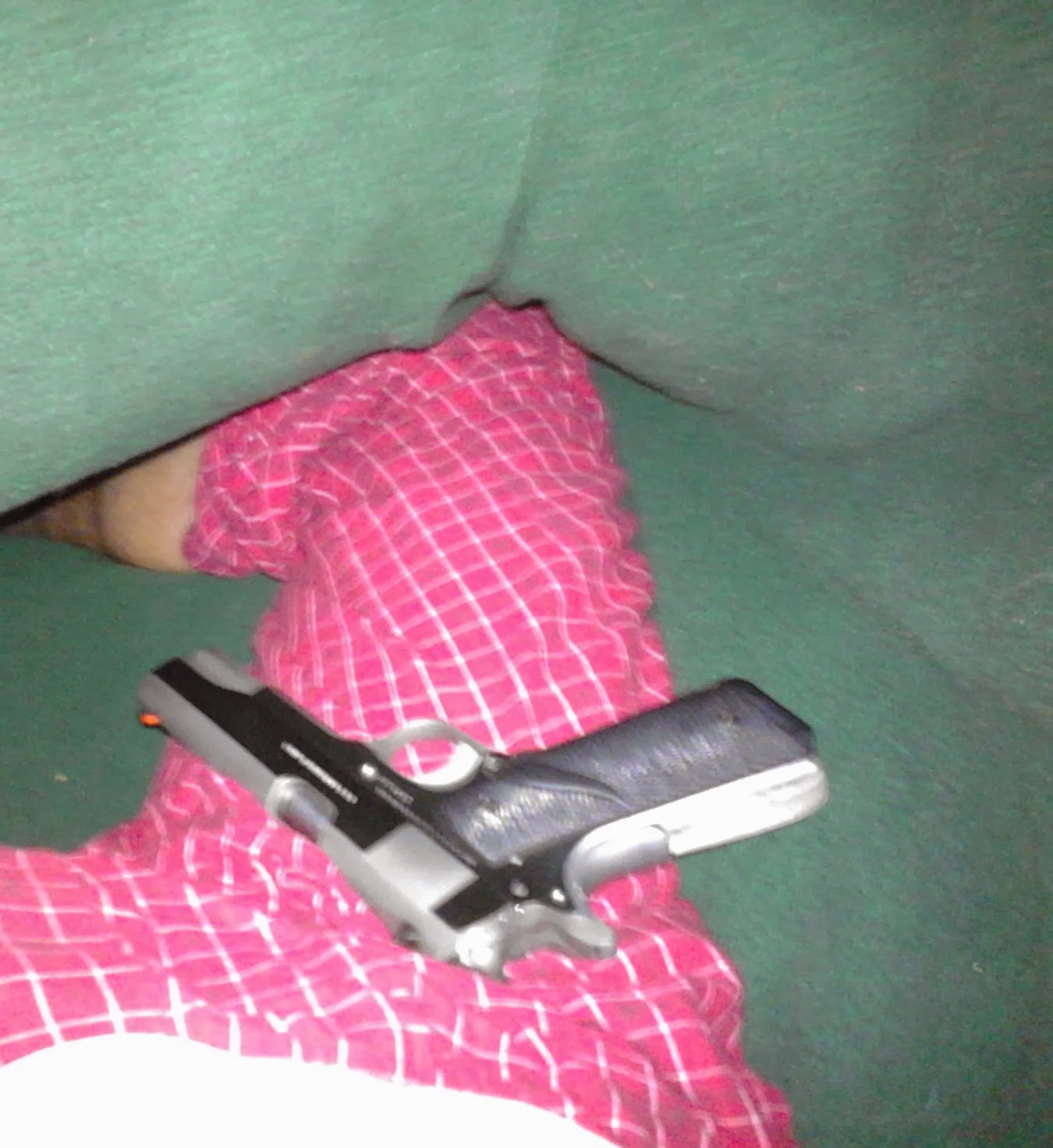 And always make sure your compounding pharmacy uses genuine Zombie Max in its medicine! 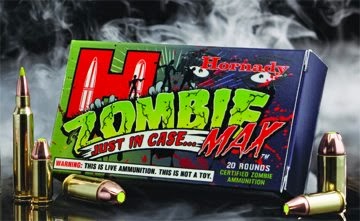 Edit: Chalupa Cabrito correctly points out that disconnection of torso and brain stem brings lasting relief from vexations of the undead.  Herewith my field kit for just such purpose:

Tramontina - not just overpriced pots and pans.  It's the Portugese manifestation
of an ancient Aussie expression that translates to "Now that's a knife!"

Edit number-iete dos: "Coming up next on afternoon TV gabfest - Zombies and the men/women who love them!" 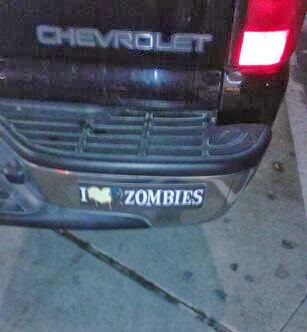 For the tree huggers

I'm curious - if you pay too much for the electricity to refill your Chevy Volt or Nissan Leaf... 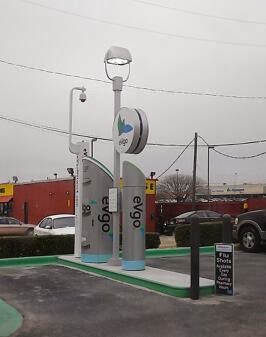 ...have you been over-, or under-charged?

And if, after getting stranded outside of Lubbock for 9 hours because the range was 15 miles less than advertised, you beat up the dealership salesman - do you get a bonus battery charge from the DA?

Posted by an Donalbane at 7:58 PM No comments: