To the mother of my kids, and to Todd the Blogger, who share the same birthday, two or three years apart.
Posted by an Donalbane at 5:01 AM 3 comments:

How could they not know?

An Ocala, Florida ice cream store has discontinued using the following mascot, after some area residents complained that it resembled - can you believe it - a KKK robe.

Knowing just enough about guerrilla marketing to be dangerous, it's my considered opinion that this was intentional, and got them free pub the two month old store would never have had the capital to afford.
Posted by an Donalbane at 9:14 PM 4 comments:

Local news outlet reports that 30 Dallas zoo patrons were stranded for 90 minutes today on a monorail in sweltering, 90 degree heat*.

"We were freaking out; everyone was freaking out," Jessica Tell said. "There's no other way to get us down? It's 40 feet up! I wasn't prepared to do that ... I can't go down in sandals. It was a very shocking, scary experience

*For those readers who feel 90 degrees is hot, please understand we've just been through a summer with 70 days of over 100 degrees - today was quite pleasant by comparison.

The TV news reported that many of the riders were, gasp!, children.

Do you suppose those kiddos will breathlessly tell their friends about the black rhinos or giraffes they saw at the zoo - or the fun adventure with the ladder truck crew?

Of late almost all of my posts have been 'phoned in'- figuratively, that is, as I've relegated to just linking some songs and posting photos that caught my attention.
A lot of thoughts rattle around, though, which at some point I feel compelled to journal (whether anyone reads them or not). It probably has the effect of making me appear a curmudgeon - something which I've many times acknowledged.

Oh, yeah - Dew, before you remind me that this is paleolithic (am I using too many syllables?) - remember what blog you've tuned into - everything here is retro...
Posted by an Donalbane at 8:13 AM 4 comments:

As if driving on I-35 wasn't hazardous enough: 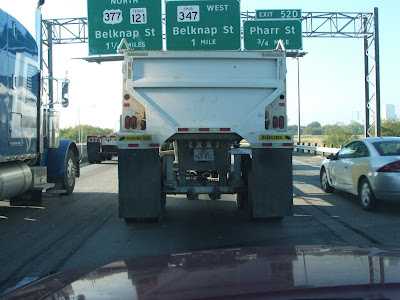 (Click to enlargenate to read the yellow bumper stickers)
OK, we didn't have ourselves so much of a convoy as we had a parking lot, good buddy.
For an interesting explanation of how radio (APCO) Ten-codes (now largely obsolete) came to be developed, click here.﻿
Posted by an Donalbane at 6:05 PM 1 comment:

Wouldn't this be just the berries for your Halloween tailgate party? 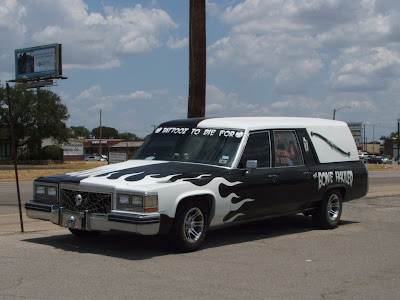 Posted by an Donalbane at 7:59 PM No comments:

How to tell if your postman is a munchkin 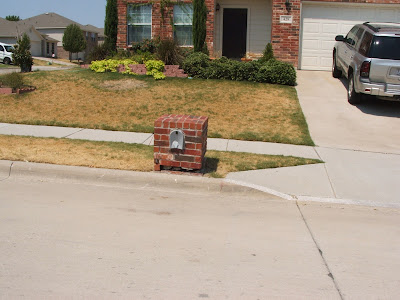 Posted by an Donalbane at 6:33 PM No comments: 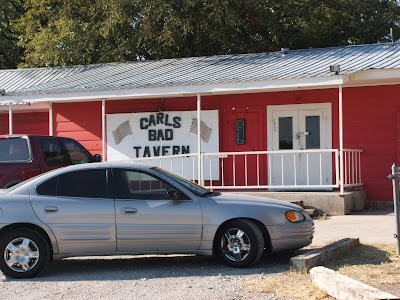 Posted by an Donalbane at 6:30 PM No comments: 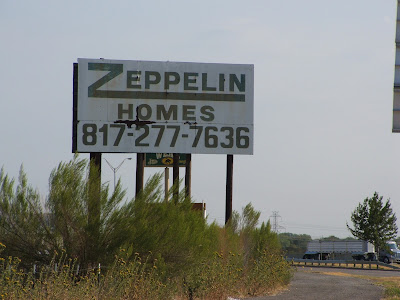 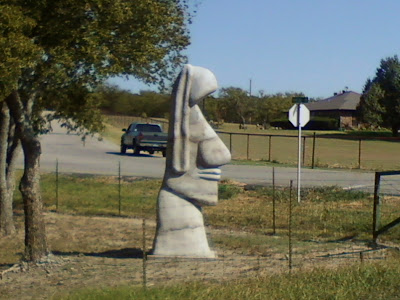 For bringing some cooler weather, and rain,  last week: 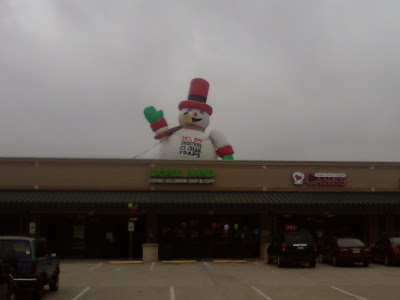 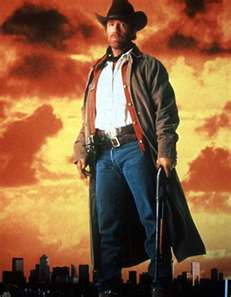 Yesterday morning, I arrive to work, noticing I have a text from former colleague Shay:

Recognizing the genre, I picked up the gauntlet, responding throughout the day [in between, uh,  important work], with the following, mostly song references:
In return, Shay responded with several additional entries:
Speaking of important work, I had to go to the courthouse yesterday - the one that, until my oldest son was about six years old, we referred to as "Walker's Courthouse" (since it was supposedly where Walker had his office).  Yeah, I had to run about 100 yards back to my colleague's car when I realized I had my penknife with me - one I've carried since about 1996.  No way I'm giving that up.  The security guy said he'd have done the same.

Bert and Ernie take to the road to dispel rumors that they're gay: 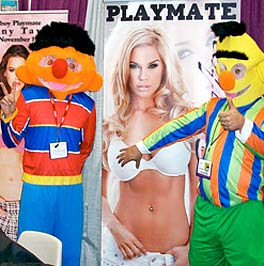 The rumors apparently began from each making statements to media outlets that throughout their careers they had been continually groped from below and behind by the other.  The forty plus year controversy was finally put to rest when the pair were informed that they're puppets.
Posted by an Donalbane at 8:23 PM No comments:

"So, it was like in the middle of sophomore year, fifth period algebra.  Tom leans over toward my desk and starts whisperin' something in my ear.  I tried to shush him, but he wouldn't give up.  Finally Mrs. Teewinkle looks over and says she's gonna make both of us stand in the hall until the end of class if we don't cut it out."
"What happened then, did you break into a dance?"
"No.  Tom spent the next several minutes with a pencil and some paper, and when Mrs. Teewinkle wasn't looking passed me a folded up message."
"Was it a love note?"
"No,  he doesn't roll that way.  It was a drawing.  Really exquisite art.  I still get a tingle when I think about that."
Posted by an Donalbane at 8:05 PM 1 comment:

In time of crisis, where do you turn?

Who can you blame?  Who do you praise?  Has anyone had it as bad as Job?
That's someone I need to remember next time I start to feeling sorry for myself...

Like the first responders entering the twin towers as the workers exited, someone's waiting to enter our lives to make a difference, even if everyone else is walking out.
Posted by an Donalbane at 8:29 PM 1 comment:

Carl Hilding "Doc" Severinsen, one of the musical greats, performing Leon Russell's A Song for You:

I was originally looking for a copy of MF playing The Spirit of St. Frederick, but the sound quality wasn't quite what I'd hoped for.  It's from It's My Time, and sounds amazing through some Carvers or Bose, Sennheisers or Koss.

And because of the date (I originally drafted this post on 9/11/11),  here's  another Maynard clip that's apropos:

Posted by an Donalbane at 8:42 PM No comments:

The end of summer is near...

So the Sno-Cone stands are closing for the season, including this one: 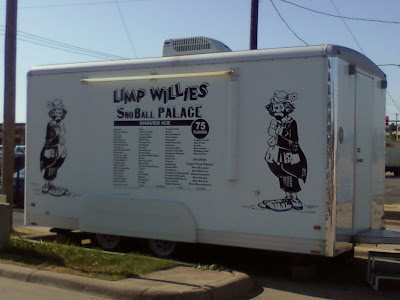 Now, I don't know what the secret ingredient is in the little blue sno-cone.

But I think if Limp Willie tried one, he might not look so sad...
Posted by an Donalbane at 10:09 AM 2 comments:

Say it isn't so

I'm gonna surprise you - I get some/lots of emails from conservative groups, mostly demanding me to write my elected officials and/or send money.  I also recently got an email thanking me for my past support of President Obama (at least that's what the subject line said).  WTH?  Of course, it may have also been from a conservative group, a ploy to get me to open the email - either way, it didn't work.

The other day, I got a message reading Obama Begins Passing Anti-Gun Laws Via Executive Fiat.

Well, I once owned a Fiat 850 Spyder, right out of high school, so I'm skeptical. 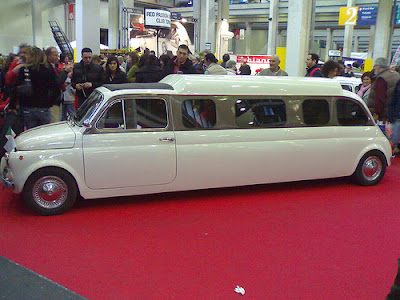 I really can't imagine much of anything being passed by an executive Fiat.
Posted by an Donalbane at 10:00 AM 2 comments:

Because I couldn't remember...

...whether this person was half-Mexican or half-Italian: 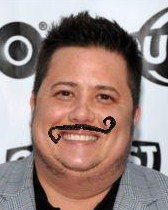 Turns out Sonny was of Italian descent.
Posted by an Donalbane at 9:03 PM No comments:

The times, they have a-changed

This was posted over at the Jar-Jar Chronicles this morning - a look back on those monochrome days a half-century or more ago:

Heck, even I'm smart enough to know that approach won't fly in getting me a 'helpmate' here in the '90s, er, I mean the 21st century.