We all have 'knots' in our lives

Lord, help me untie mine.
Posted by an Donalbane at 6:47 AM 2 comments:

Have y'all ever seen any DPS Troopers like this?
Posted by an Donalbane at 8:59 AM No comments:

A comment by LandShark over on Chupacabra's blog reminded me of this movie from 1976, from comedy genius Neil Simon.

Wouldn't we all love to find such a someone?

And to be that someone, as well.

Never underestimate the privilege and blessing of having someone to love and serve.
Posted by an Donalbane at 8:22 PM 3 comments:

Let us give thanks

Early last week, my friend, colleague and fellow blogger Todd, sent me an email asking if I had any Veterans Day plans. He and another co-worker, Dewey (we call him Doodle-bug, and other names) were planning to go to D/FW International Airport to greet the incoming R&R troop flight. Now, to be honest, I'm not sure which of them conceived the idea of going out there, I only know that it wasn't me. I did mention that I'd have to get up quite a bit earlier than usual, to which Todd the Blogger wryly commented that maybe I could survive the sacrifice, inasmuch as those we'd be greeting were probably sleeping on a rock, a cot, or a C-130 just hours before their arrival at D/FW. He has a way of adding perspective to things.

So, we agreed that since we'd be off work for the day, we'd meet somewhere for breakfast, go out to the airport to greet the troops, and also possibly work in some target practice at the shooting range.

Then came the Fort Hood murders. Even though we had already planned to go to the airport before, there was no way you could've kept us away after. I've never served in the military, but it really struck me as a real pisser (please excuse my language) to be dodging bullets, mortars, RPGs and IEDs, only to come home to find some lunatic has shot up his fellow soldiers on American soil. On base, no less.

We met at the Dixie House Cafe in Bedford, had a great breakfast of eggs, BACON, biscuits & hash browns, smothered in gravy, then made our way to the airport.

There was a pretty good crowd assembled at Terminal D, Gate 22 waiting for the soldiers from Afghanistan to deplane. While we waited, a facilitator called forward veterans from the World War II era through the present to be recognized for their service. There was a particularly enthusiastic response when she called out for Vietnam vets.

Having been a child in the '60s, I saw the evening news of Dan Rather in the jungle, students placing flowers in the muzzles of National Guard M-14s (?). I only learned later in life of returning soldiers being spat on and called hateful names, quickly changing out of uniform so as not to be recognized on the streets of an ungrateful nation. So, I'm always pleased for the opportunity to thank the Vietnam Vets, albeit belatedly.

My first troop arrival visit was, I think, in 2002 with a local chamber of commerce group, in the initial wave of returning soldiers following 9/11. I think we shook a good percentage of the soldiers' hands, welcoming them home and thanking them for their service. Other visits followed, with the Lions Club & the Scouts (both times with my sons), and also on the return of a friend, Becky, who'd done two tours in Iraq, working in a trauma center (she was there when the ABC newsman, Bob Woodruff, was injured by a roadside IED).

Today, a local day care center owner had thoughtfully made up dozens of "goody bags". Other people were giving out phone cards, or some kind of literature. Most people were respectful of the soldiers' space, but a few seemed to want to stop each serviceperson and impart some kind of words of wisdom. I'm not sure what profundity one can offer to people who, just days earlier had possibly witnessed unspeakable acts, so I was proud that my buddies and I stayed just a little bit back, offering a simple "thank you" or "welcome home" as the soldiers passed by. I'm sure the gift bags were well-intentioned, and I don't know what they contained, but I'd have to guess that most of these people, toting 50-80 pounds of gear, weren't too keen on something else to carry - luckily, they were placed on a table and weren't being thrust at them.

Looking into the faces of the service- men and women, a few seemed young, but most appeared to be in their 20s, 30s and even 40s. I can only speculate what thoughts were in their minds: Anticipation of seeing their loved ones, possibly a new infant. Anxiety of a relationship strained by time and distance, economic hardship. Desire for some rest. A prayer for peace.

I'm glad our nation has moved on from the way we treated our military members in the '60s. I hope the gratitude witnessed in terminal D today will extend into the hiring offices and the communities when these heroes come home to stay.

To the bloggers Kevin (Combat & Jarhead) - Thank You for your service in preserving freedom!

Edit: I checked my office email this morning - It was actually Dewey who invited Todd and me to join him in greeting the returning troops. Thanks, Dew!
Posted by an Donalbane at 12:55 PM 3 comments:

Friday, during the course of my work duties, I'm looking for an office, somewhere near, let's say, the Stockyards. Though I've found the address, it appears to have multiple tenants. As I approach the building, I'm trying to determine where I might find my party. A man sitting on the front driveway curb, slightly disheveled but not ragged, offers: "There's a stairway around the corner leading to a door upstairs."

I followed his directions and gained access to the building, finding that the fellow I was looking for no longer officed there.

Passing the man on the way back to my car, we exchanged brief pleasantries about the beautiful weather. Back in my car, I was making notes detailing my visit when I saw the man approach, and I rolled down the window.

He held out his hand, not in a way that would cause alarm, and shook some change around. "Mister, could you spare some change so I could buy a burger?"

I don't smoke, so my ashtray is instead amply populated with all the standard denominations of American coinage. I thought about getting several out. But I remembered that I had some crisp dollar bills in the console, change from some drive-through purchase, and I gave him those instead.


Saturday, my sons and I went to the other side of the world (east of Dallas) to pick up some furniture. On the return trip, the low fuel indicator came on in our borrowed pickup. Since Dodge V-10s don't get such great gas mileage, I didn't know how far I had before I have to use my thumb, so I started looking for a station, only there aren't any along that stretch of the C. F. Hawn Freeway. I finally found a convenience store, selling gas at about 35¢ over the going rate. I didn't really want to stop in this part of town, and don't like to be gouged, but I figured it was better than running out of gas there.

As we pulled in, it felt like all eyes were on us. I'm not racist, but I carry the memory of a former co-worker's son who was killed in a carjacking about fifteen years ago not too far from there. So I discreetly handed my older son, who was in the back seat, a small package from the console (I am a CHL permittee). "Cover me if I need it."

I got out and a middle-aged gentleman, from out of nowhere, is holding the pump hose and reaching for the filler door of the truck. "How much you gonna get?"

"You just go ahead and pay inside, I'll pump it for you."

I went inside and paid my $10, slightly surprised to find the owners appeared to be Korean, since no one outside was. On returning outside, the man pumping my gas began a conversation.

"You moving a desk?"

"Those your boys in the truck?"

"I could tell they are."

"They play any sports?"

"The one in the front plays basketball at school."

"Is he pretty good?"

"I'm gettin' back on my feet after surgery." [Lifts his shirt as if to show a scar, like LBJ] "Just trying to earn some money for a meal."

As it hadn't taken long to put $10 in the behemoth's tank, I fumbled in my pocket and put a bill in his hand as he put the hose away.

As we drove away, we pondered whether the man worked for the filling station, or just freelanced there for tips.


At the beginning I mentioned reluctance in relating these stories, for several reasons. I'm not sure what, if any significance, they portend. Was I right in being concerned and possibly distrustful in the second story?

Both of these men gave their wishes for God's blessings to me. Just words, possibly cynicism you might say? Perhaps. But, Matthew 25: 40-46 speaks of our actions toward our fellow man as the same as for Christ.

And, in the end, I wonder: Were these men among the least whom the Lord commands us to help?

Or am I the one they helped?
Posted by an Donalbane at 5:24 PM 3 comments: 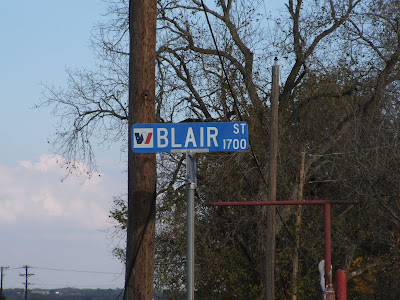 Saw this on my travels today. I'm sure RPM (The South 40) could tell me exactly what it is. 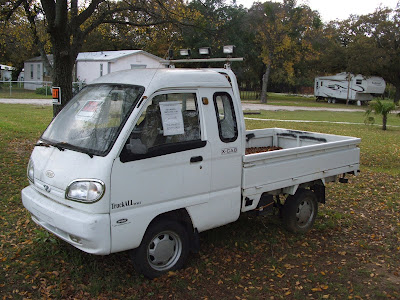 Extended cab, check. Light bar, check. This would be great for the deer lease.


Edit (for RPM's benefit): Stripper pole not included.
Posted by an Donalbane at 5:16 PM 1 comment:

Our wild night in Cowtown...

Saturday night, we checked out an open house presented by the Texas Western Model Railroad Club, in South Fort Worth, on Anglin Drive. Over 700 rail cars and dozens of locomotives, probably tens of thousands of hours of meticulous craftsmanship on the scenery. 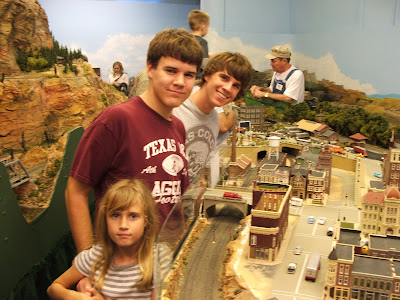 A hundred years from now, kids will still be doing this to their siblings in pictures... 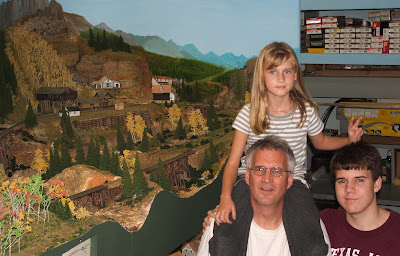 I wish I had one of those PlasmaCam cutting torch tools - I could make art like this... 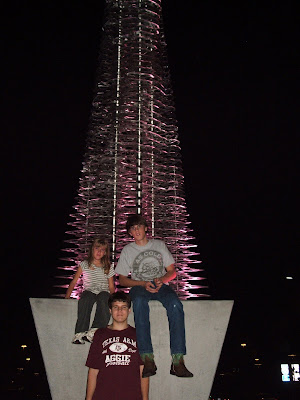 A little tour of the Water Gardens.
Note to self: Pack lens tissues with camera next time. On second thought, the effect is probably appropriate... 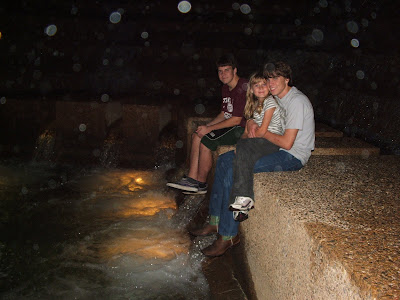 I'm like, not into tattoos, but if I were, I'd go to the Psycho Clown parlor. Wouldn't you? 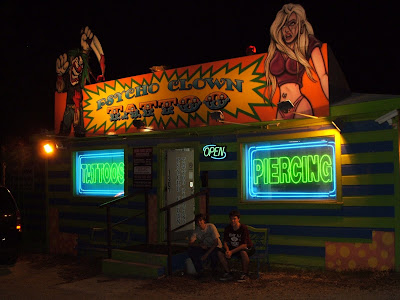 Of course, all this sightseeing made us hungry. Then we spotted this sign, outside of a Mexican eatery on NW 28th Street. I'm guessing it probably suffers in the translation. 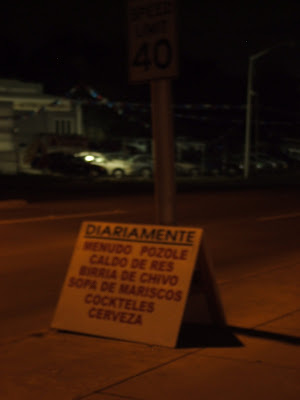 We went to Church's instead...

Posted by an Donalbane at 6:27 PM No comments:

I need to escape from the Planet of the Apes! 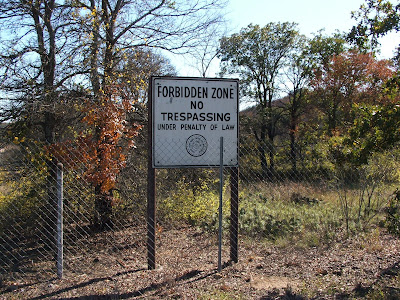 Posted by an Donalbane at 6:22 PM No comments:

My son sent me this video of stunt pilot Skip Stewart. If you're not into flying, don't bother. If you are, it's way awesome.

The only downside to this song has been pointed out by some commenters, that there are only two verses and no denouement. N'est-ce pas?

Posted by an Donalbane at 5:32 PM No comments:

I don't know what to do. Should I hang on to the old? Should I grab on to the new? 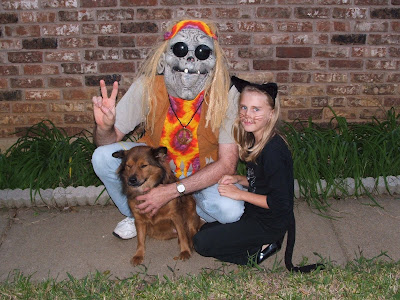 Some people say I look better this way...