Let's hear it for the Mod Squad

OK, this next predates my high school years - by about eight - but somehow I found it playing on one of the vacant channels of my mind today, and thought it was groovy.

True to form for this blog, my research indicates that only the chick remains above ground.

In the foreground, in formal wear, the lead guitarist looks kinda like David Niven.  In the background, ya gotta like the drummer wearing a Billy Jack hat.  It's so hippy-dippy, you expect to see Dan & Dick, Ruth, Goldie, Arte, JoAnne & Henry pop out at any moment.

The interlude is wicked trippy, even better in this alternate take with better audio (is that V. Putin in the audience at 1:27?).

The name of the band is Spanky and Our Gang, which brings up a totally non-sequitarian point:  I have had the good fortune to have met the original Little Rascals' Spanky McFarland, some 25 or 30 years ago, and more recently, the actor who portrayed Spanky in the 1994 movie.

Flashback to the '70s

There's just something that draws you back to the music of your high school years.  I am, of course, OK with that.  Saw these guys at the SFOT Music Mill Amphitheatre in, oh, about 1977 or so.

[England] Dan Seals, younger brother of Seals & Crofts' Jimmy Seals (whom I also saw at SFOT on another occasion) passed away in March 2009 of lymphoma.

Posted by an Donalbane at 1:36 PM No comments:

My church celebrated CdM last weekend by featuring a huge guacamole bar in the lobby: 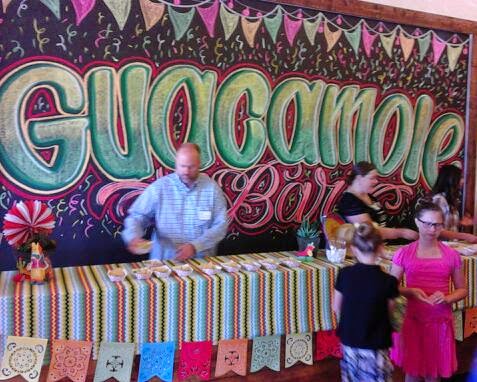 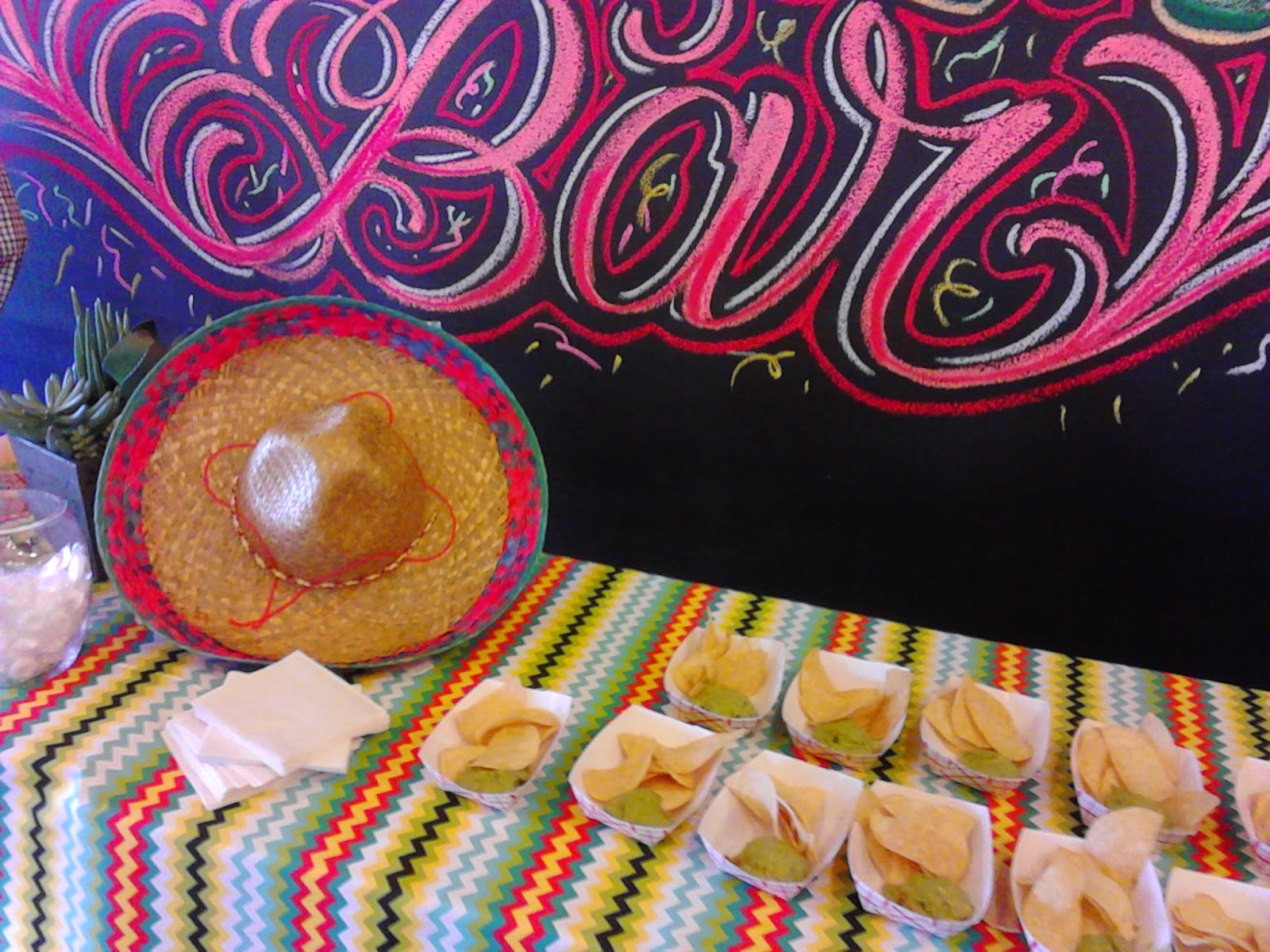 While CdM's place on the liturgical calendar isn't exactly clear, it does seem to keep the spirit of John 21:17.


Posted by an Donalbane at 2:24 PM No comments:

Step back in time

'Tis the season era to post one's images from the Renaissance Festival, herewith.

It seems there is much knowledge to be gleaned, even walking in from parking one's carriage: 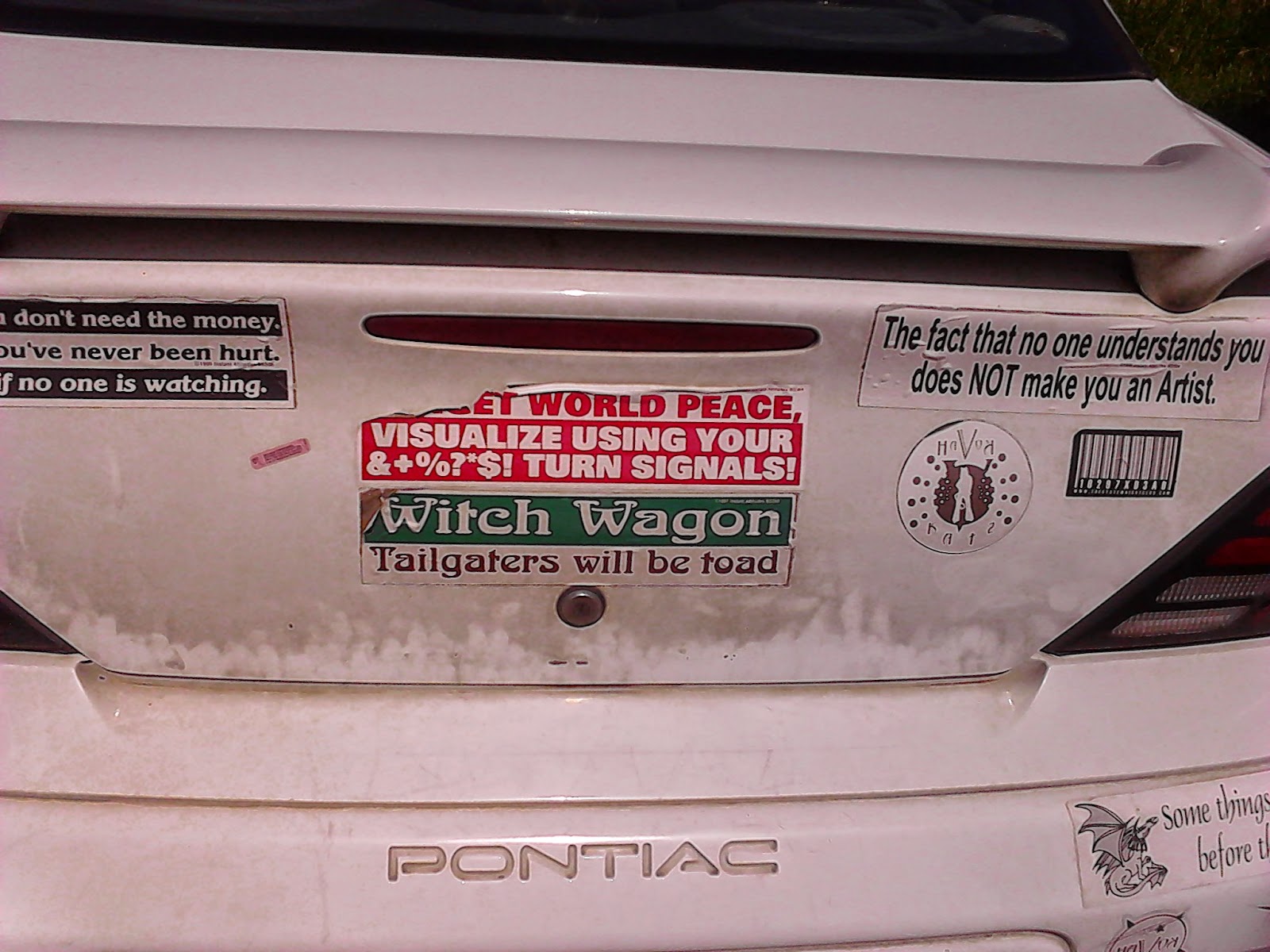 Tailgating isn't just for JerryWorld.  Here's a Forde F-OnneFidde Braveheart Edition (the other side of the bed was adorned the same): 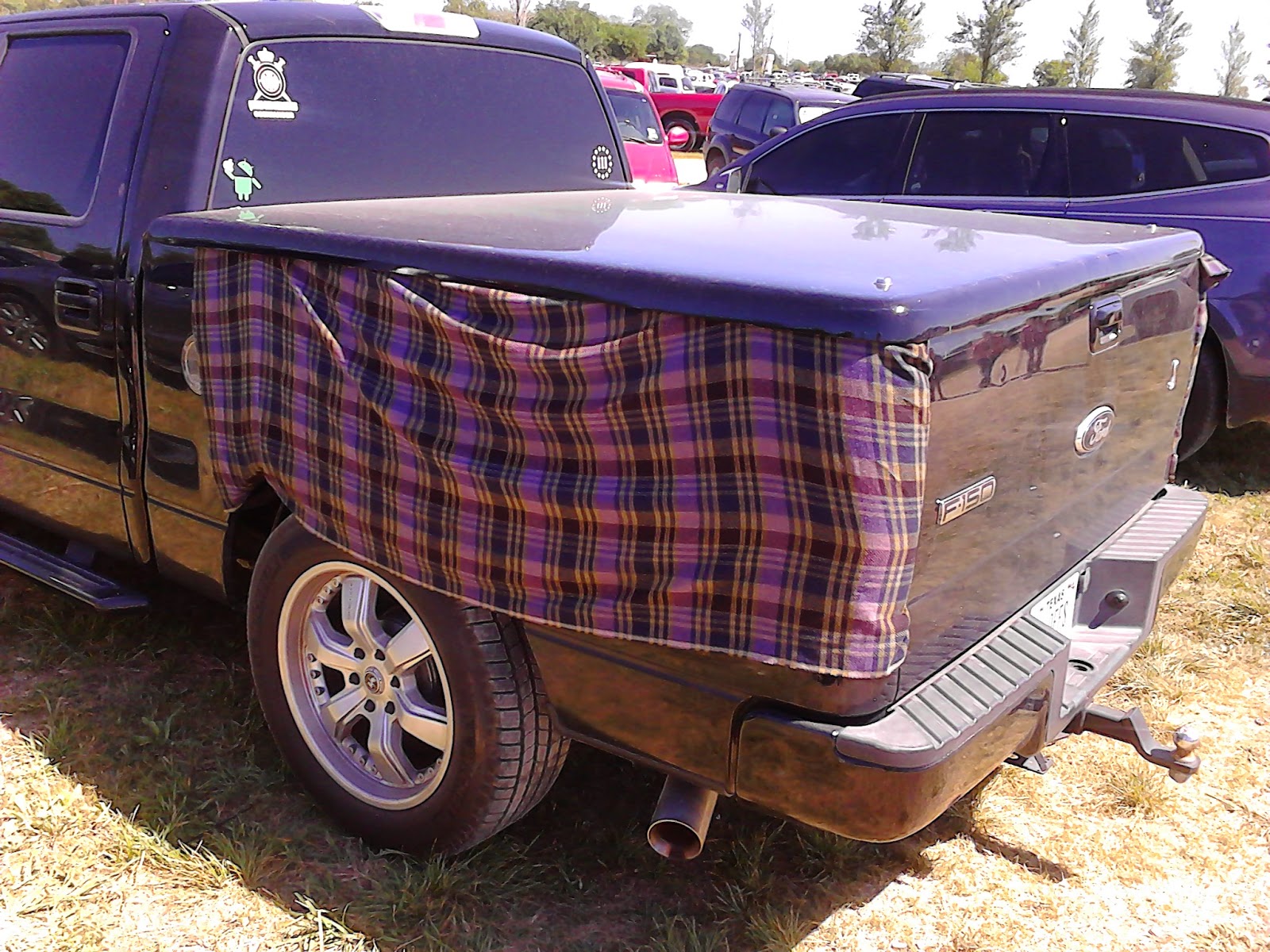 At the end of the day, there were many post-fest parties.

Sure, everybody loves a parade, but, uh, this is a little disturbing... 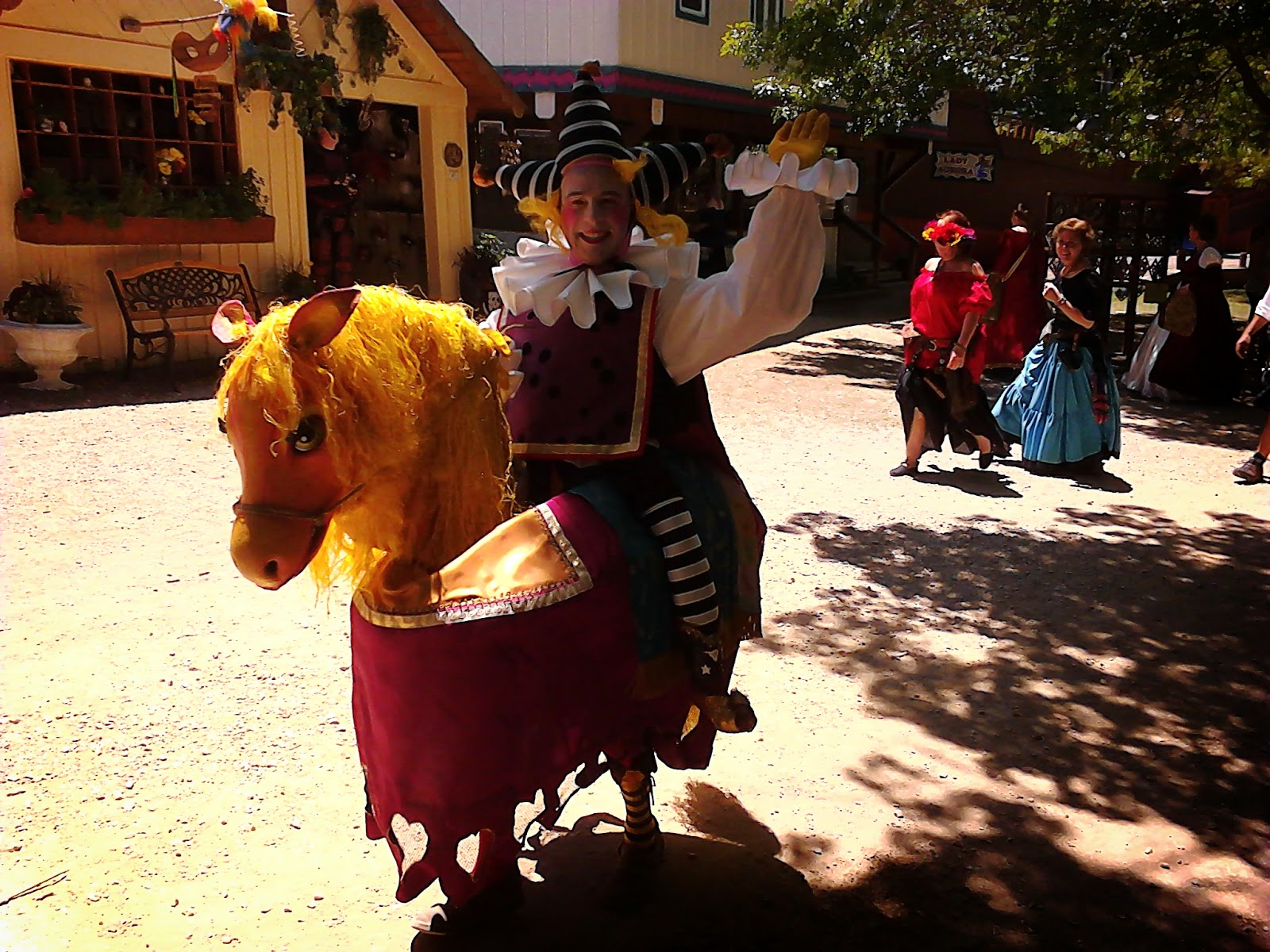 Um, no, I do not want to pet your Little Pony. 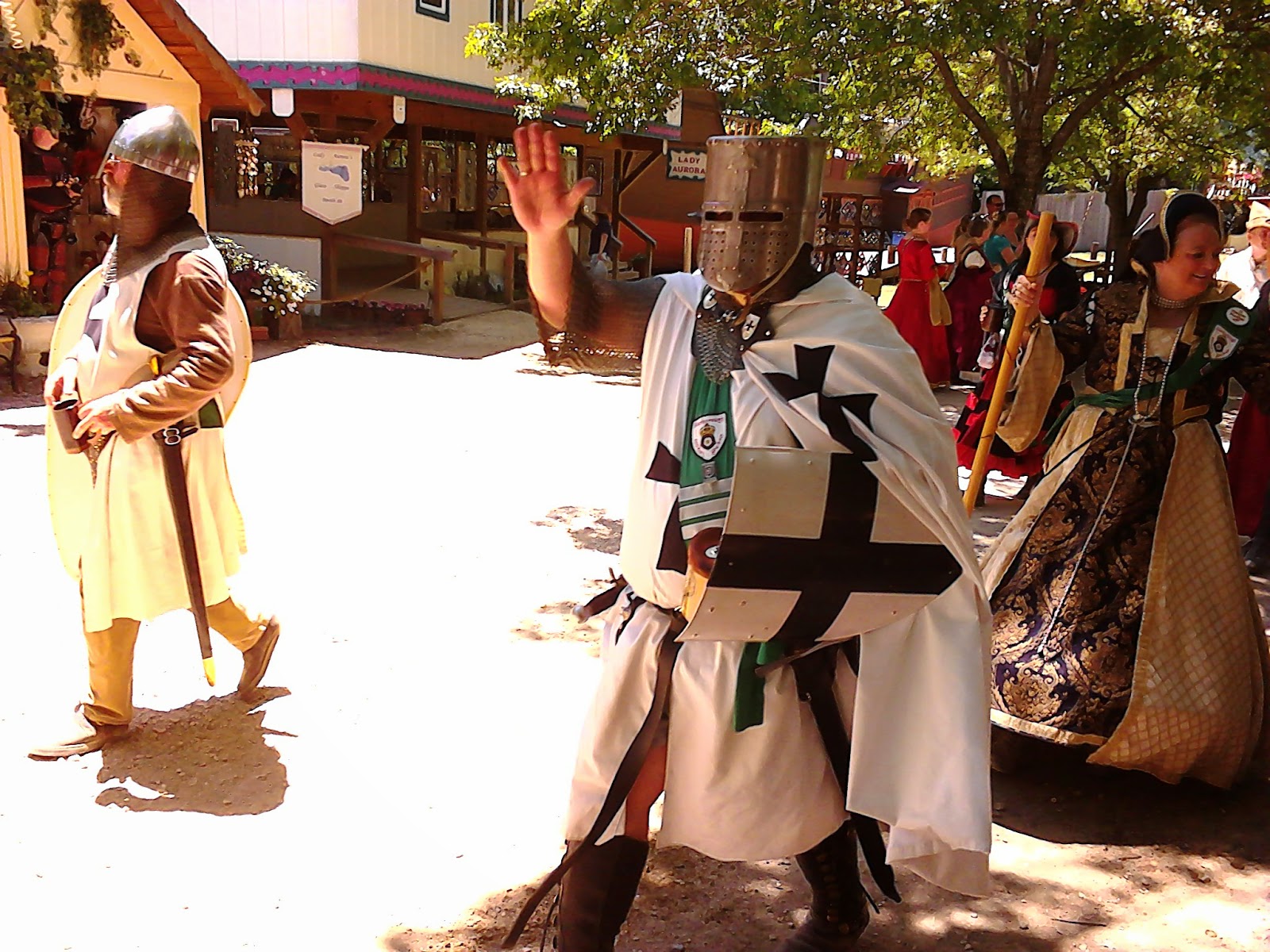 101 fun things to do with an institutional size Bush's Baked Beans can.

Actually, I tried on some of the armour and headgear at one of the shoppes.  That stuff is heavy, limits mobility, and doesn't breathe well.  Hand-to-hand combat would have been a real witch in the olde days. The archers had it much better, with greater standoff, but even they would have given their eye teeth for a Lapua .338. 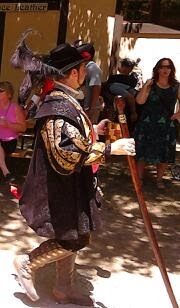 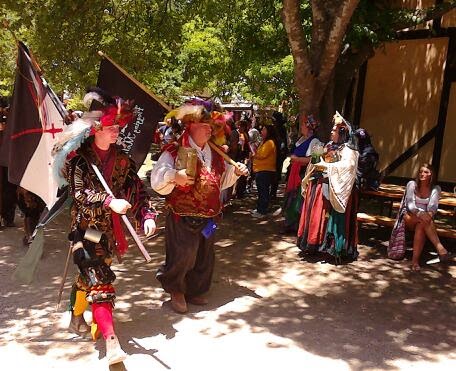 Note to medieval dudes - If your woman needs a cart to get around, consider buying her a Chevy Aveo to wear.  Or find a more compact woman. 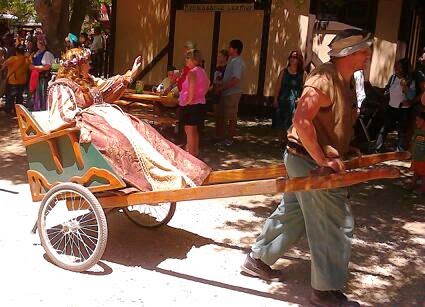 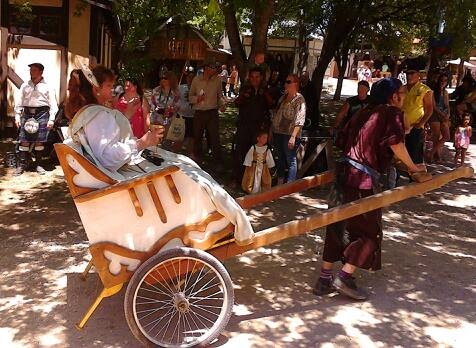 Conveyances borrowed from the entryway of the Sam of Walton clan mega-bazaar. 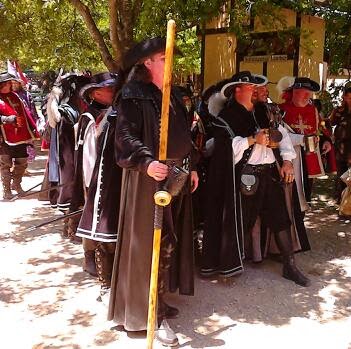 Always  keep your tankard at the ready... 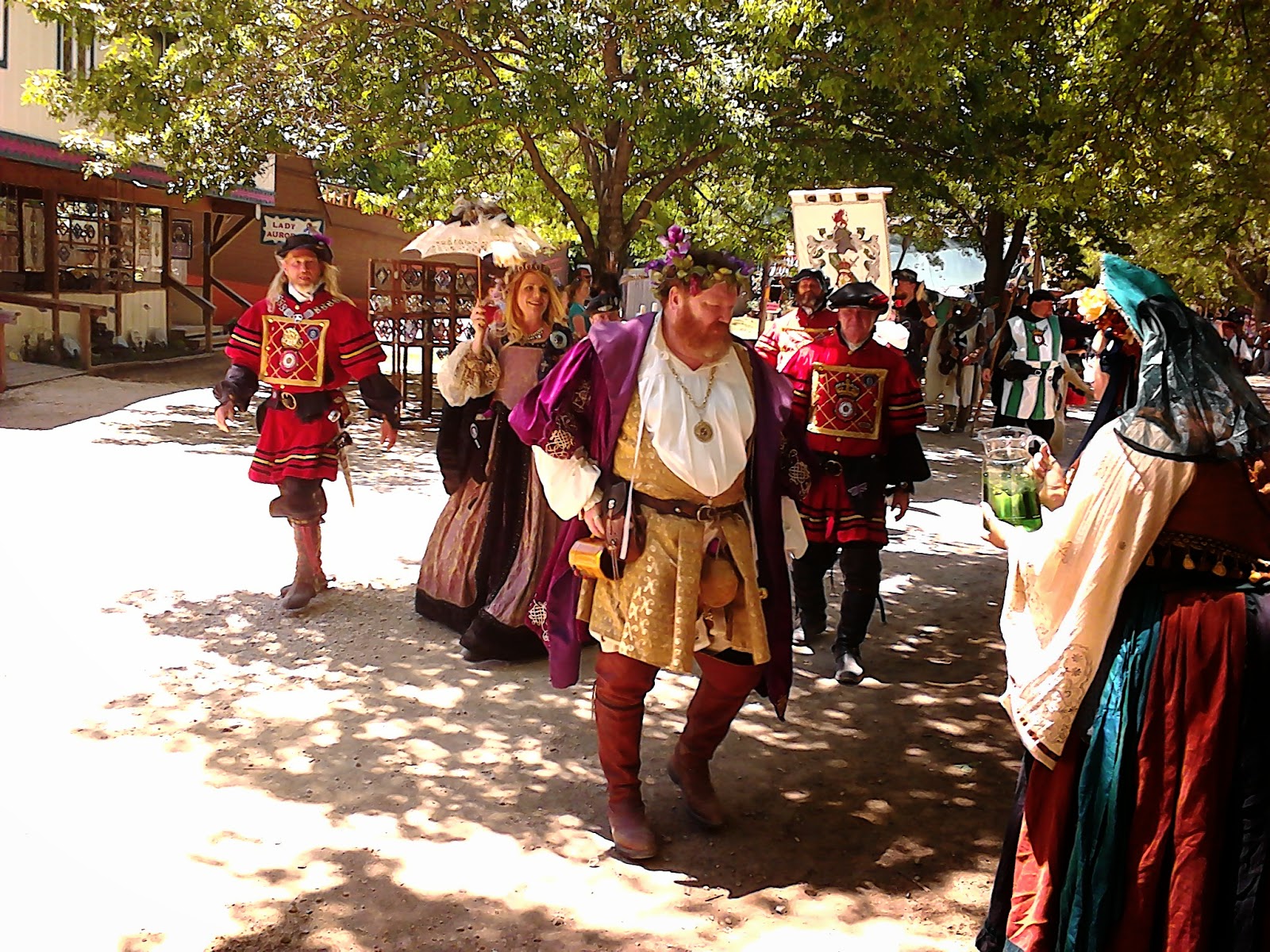 
Cast in Bronze, a trailer-mounted carillon, billed as the 'Original Heavy Metal'. This year's performance seemed abbreviated, with just two songs in the set.  Also, it seemed that someone other than the act's creator, Frank DellaPenna, was performing in the role of the masked, black-cloaked 'spirit of the bells'.
(Edit - Confirmed, FDP is performing in the Muskogee RenFest, while an understudy is doing the Waxahachie performances.) 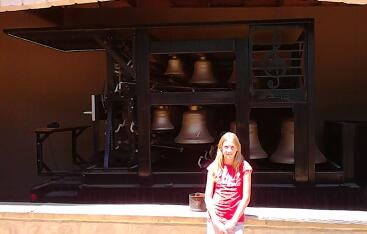 Malcolm & Angus - here's some rolling thunder for you...

The RenFest features fun for man and beast alike - here's a gypsy mutt: 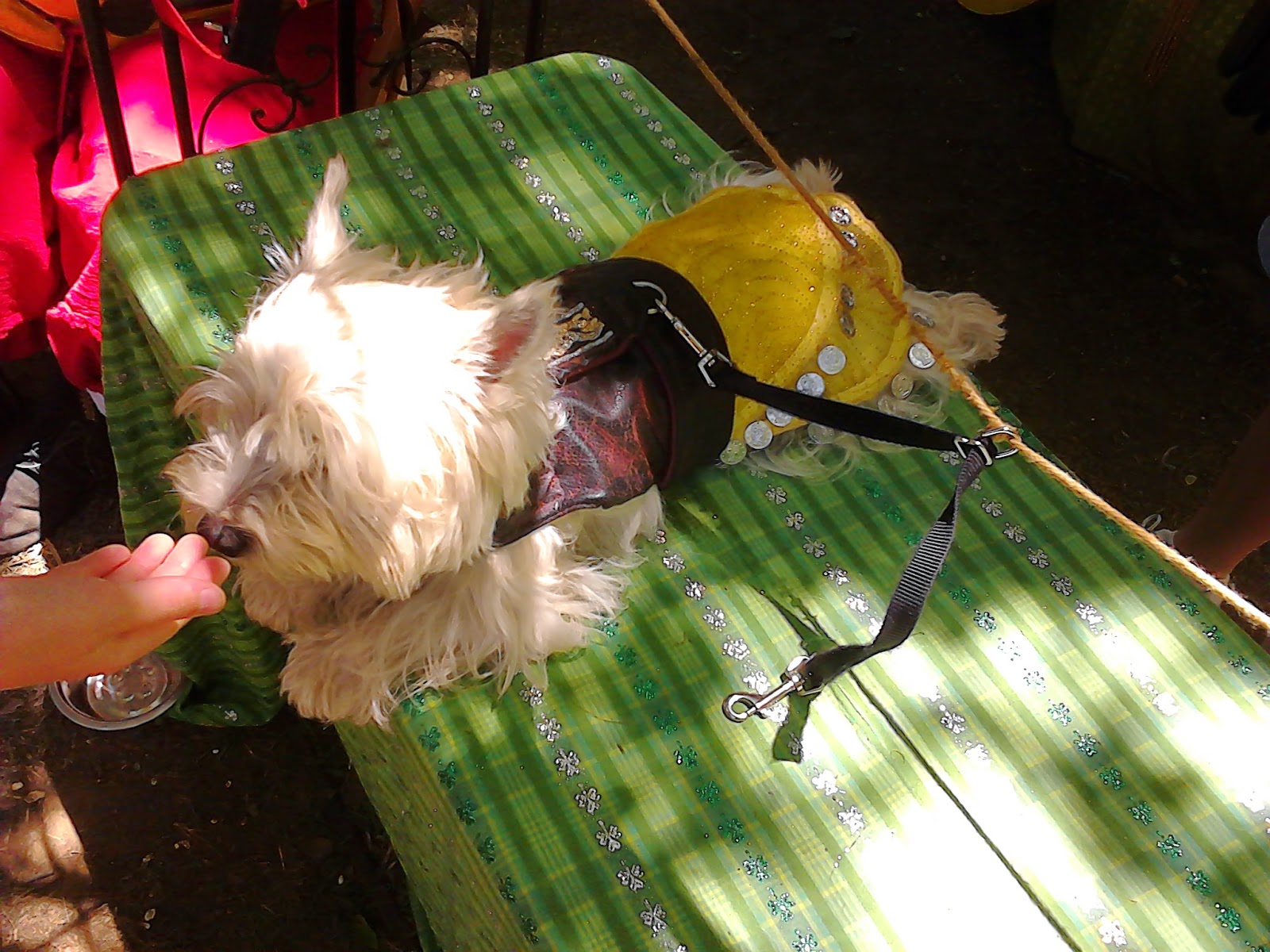 And an untrained dog act: 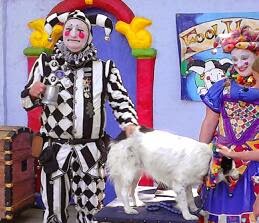 A young unicorn - others have purple horns, but this one is white.
Dew, does that mean this is a boy unicorn?

Blogger ComKev notes that he saw lots of furries on his visit.  Maybe some got their costumes here: 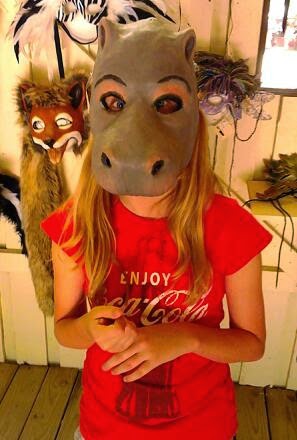 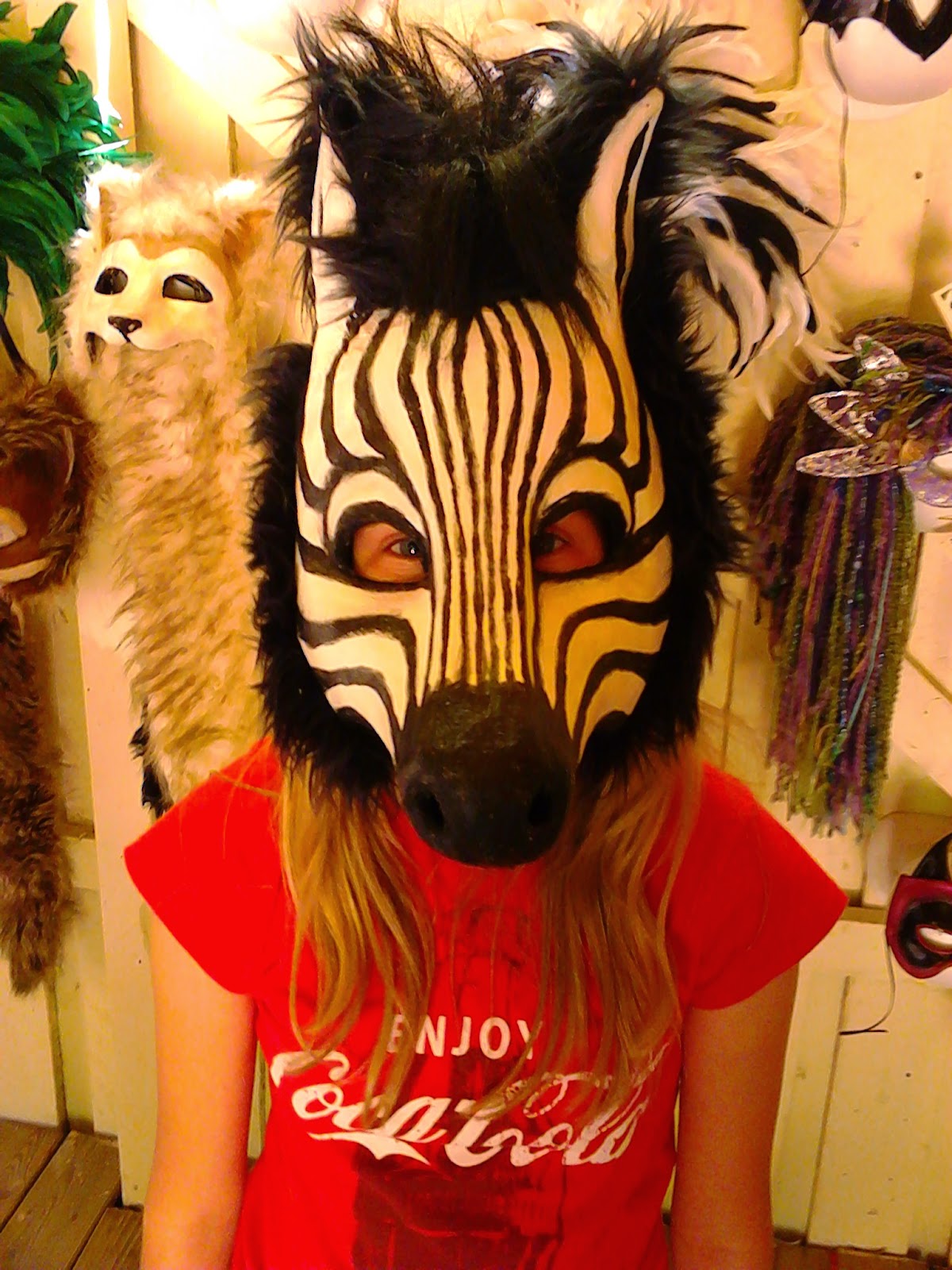 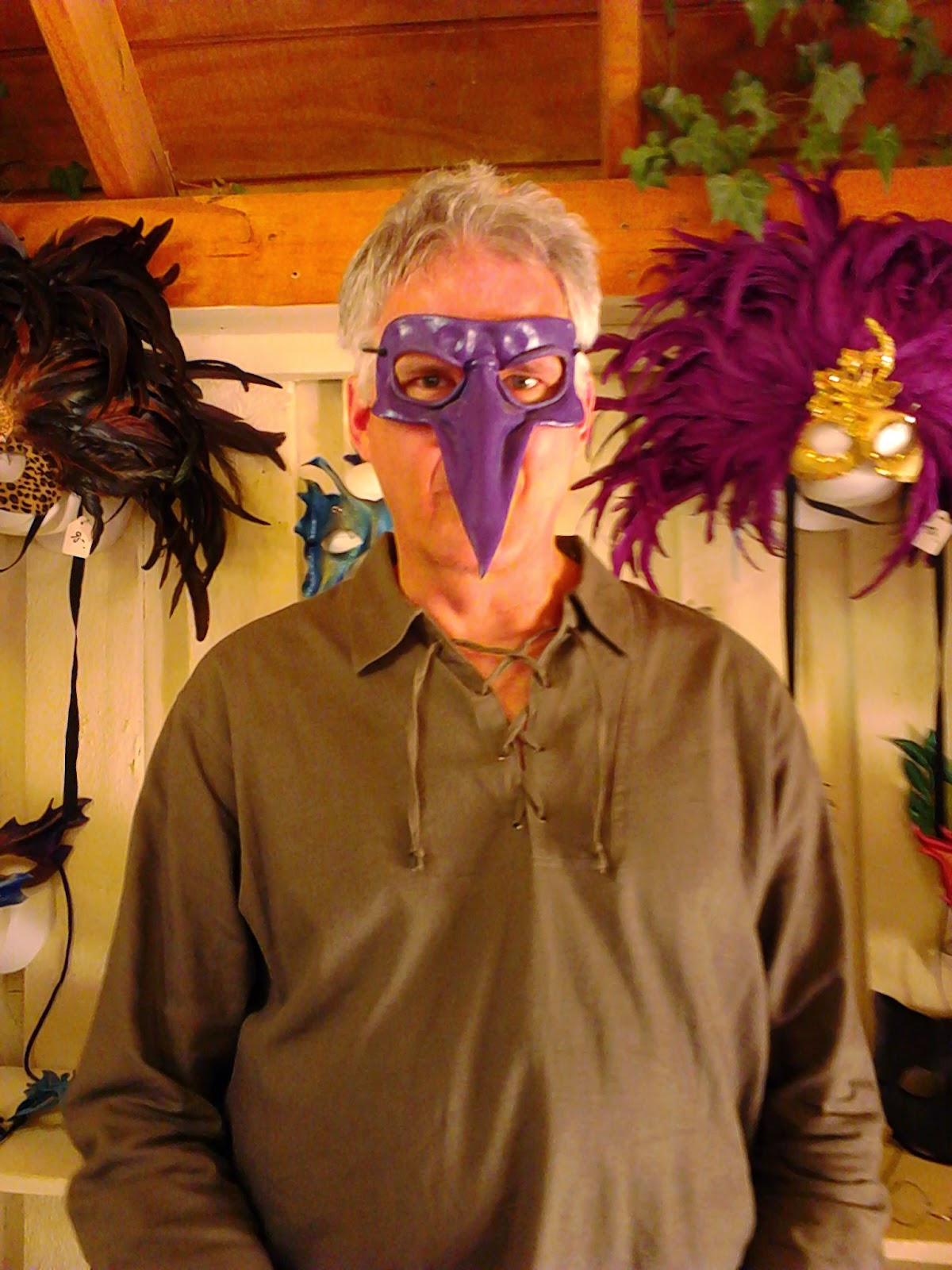 I didn't buy any costumes, but if I had been so inclined, these would've been on the short list: 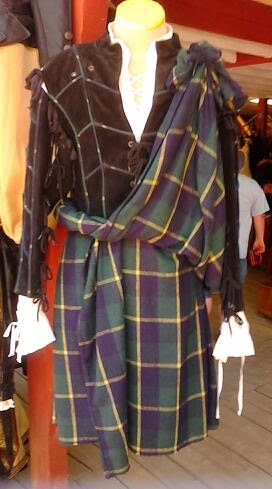 The leather doublet was pretty heavy.
Just gotta be careful to avoid the 'Clash of the Tartans' 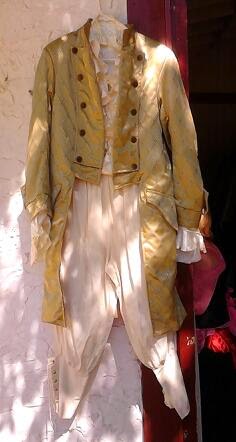 This one could possibly double as clothing for B. Franklin or T.J.

I was bummed that the miniature Daniell cell in my communication device died late afternoon, limiting the number of daguerrotypes I could take.