I know, this isn't a revelation.

Watching the local evening news, OK listening mainly, but as I passed through the den I saw something that looked like a low-speed chase unfolding on my Toshiba screen.

Did O.J. stab someone else?

Turns out the hoopla was about an armored truck carrying a trophy for some upcoming athletic contest in the area.  Nit-wits lined up on the street to watch its arrival.  I guess the paint drying exposition was over-booked.

News reaches us from the Pied Piper's blog that 5000 tickets for the brain dead to watch TV in a parking lot, at $200 each, have been sold.  Inasmuch as I try to keep a family friendly blog, I won't repeat Axel Foley's (Eddie Murphy) response to Serge (Bronson Pinchot)  after hearing the asking price for a piece of  'modern art'.  But it applies here.

P. T. Barnum was way too gracious.
Posted by an Donalbane at 5:00 PM 7 comments:

Found this on the YouTube, a more Nashville-infused version than is featured on Inside Job.

Unfortunately, the embed code was disabled, so if you want to see it, click here.

First, let me say that I am not a Marine, and none of my relatives was.  A couple of uncles served in the Air Force.  I hope it's not indecorous for a non-Marine to use the motto.

A work colleague friend told me the story today, possibly apocryphal, of a miscreant who decided to take an extended 'borrowing' of a piece of electronic equipment from his local Wal-Mart.  Said goblin attempted to secret said gear under his shirt.

Unfortunately for the vermin, a plain-clothes security officer had observed the would-be crime, and commenced to follow him.  At some point, the thief became aware of the tail, and broke and ran.  Security radioed ahead to the front end.

Outside the store, four uniformed Marines were collecting toys for "Toys for Tots".  Alerted about the fleeing shoplifter, they stopped him at the entrance, at which time a scuffle ensued, and one of the Marines was stabbed in the back, but his injury was not life-threatening.

The cretin, however, did not fare so well, having suffered a broken arm, wrist, leg, collarbone, jaw, lost teeth and a concussion when he slipped off the curb.

Must've been what happened, as the security video equipment seemed to have malfunctioned on that particular zone.


Note:  I tried to confirm or dispel this story through Snopes.com, no luck.  Whether true or not, God bless our Marines!

How did I miss this?

Lindsey Buckingham, one of rock's under-recognized guitarists, played Bass Performance Hall last month, and I didn't know about it?

Yes, this is tongue-in-cheek.  I am a big fan of the I Am Second series and share its priority.
Posted by an Donalbane at 8:10 PM 4 comments: 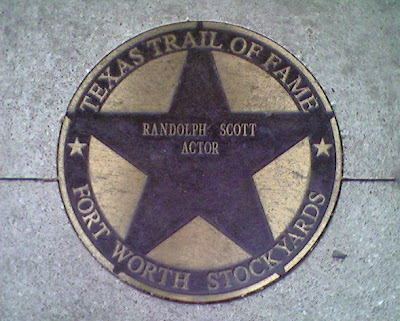 It was a challenge to keep from photographing my foot with the cell phone camera...
Posted by an Donalbane at 8:42 PM 13 comments:

OK, I never actually took atin-lay so the above internet translation may be a little sketchy, but check out the supposedly new product from Kel-Tec (it's not on their website): 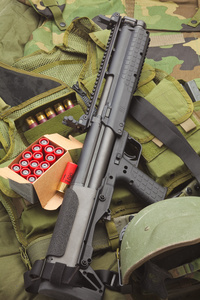 Yeah, those are shotgun shells.
And here's what it looks like from the business end, with accessories: 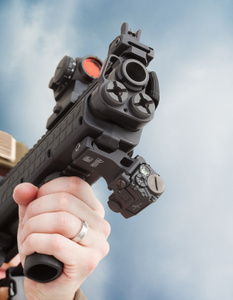 Those twin magazine tubes carry seven rounds apiece, and are selectable, with a disconnector.
﻿
I am not particularly into the Zombie¹ genre﻿, or the currently hip vampires.  But you believe Zombies are a threat in your neck of the woods, this might be a valuable tool to help keep them at bay.
One is reminded of the story that circulated recently about a Trooper who's stopped a [hypothetical] CHL-carrying motorist.  I can imagine the motorist having one of these bad boys.
"License and insurance, please."
"Yes, sir."
"I see you have a CHL, Mr. The Donald.  Are you carrying your firearm with you?"
"Yes, sir."
"Without reaching, can you point to where it is?"
[chuckle] "Yes, sir, um, there's a .357 in the glove box, a .380 in the console, a Bulldog under the driver's seat, and one of those new Kel-Tec KSGs under the rear seat."
"Dear heavens, son!  What in the world are you afraid of?"
"Not a damn thing, sir." 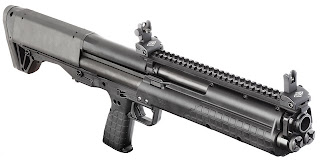 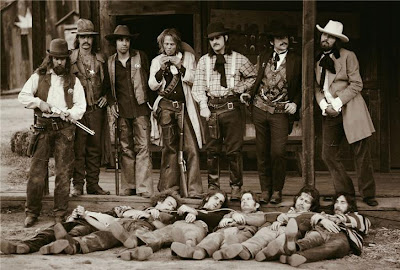 These are Eagles (and Jackson Browne), pretending to be dead à la The Dalton Gang. 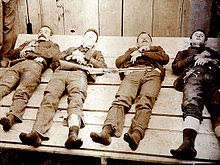 Actual dead Dalton Gang members - not pretending, dispatched by lawmen and good citizens of Coffeyville, Kansas in 1892.
They may have had cojones of brass, but brains the size of walnuts in deciding to rob TWO banks at once, in broad daylight, attempting to best the Jesse James gang.
Posted by an Donalbane at 9:30 PM No comments:

From the email bag

From the former BNSF COO to my Dad to me:


This came from a Fellow who runs a 2000 acre corn farm up around Barron, WI, not far from Oshkosh.  He used to fly F-4Es and F-16s for the Guard and participated in the first Gulf War.

I went out to plant corn for a bit to finish a field before tomorrow morning and witnessed The Great Battle. A golden eagle - big bastard, with about a six foot wingspan - flew right in front of the tractor. It was being chased by three crows that were continually dive-bombing it and pecking at it. The crows do this because the eagles rob their nests when they find them.

At any rate, the eagle banked hard right in one evasive maneuver, then landed in the field about 100 feet from the tractor. This eagle stood about 3 feet tall. The crows all landed too, and took up positions around the eagle at 120 degrees apart, but kept their distance at about 20 feet from the big bird. The eagle would take a couple steps towards one of the crows and they'd hop backwards and forward to keep their distance.

Then the reinforcement showed up.


I happened to spot the eagle's mate hurtling down out of the sky at what appeared to be approximately Mach 1.5. Just before impact the eagle on the ground took flight, (obviously a coordinated tactic; probably pre-briefed) and the three crows, which were watching the grounded eagle, also took flight thinking they were going to get in some more pecking on the big bird. 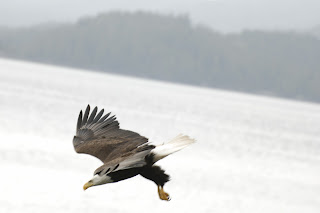 The first crow being targeted by the diving eagle never stood a snowball's chance in hell. There was a mid-air explosion of black feathers and that crow was done. The diving eagle then banked hard left in what had to be a 9G climbing turn, using the energy it had accumulated in the dive, and hit crow #2 less than two seconds later.  Another crow dead.
The grounded eagle, which was now airborne and had an altitude advantage on the remaining crow, which was streaking eastward in fullburner, made a short dive then banked hard right when the escaping crow tried to evade the hit. It didn't work - crow #3 bit the dust at about 20 feet AGL.

This aerial battle was better than any air show I've been to, including the warbirds show at Oshkosh. The two eagles ripped the crows apart and ate them on the ground.

As I got closer and closer working my way across the field, I passed within 20 feet of one of them as it ate its catch. It stopped and looked at me as I went by and you could see in the look of that bird that it knew who's Boss of the Sky. What a beautiful bird!

I loved it.. Not only did they kill their enemy, they ate them.

One of the best Fighter Pilot stories I've seen in a long time.


There are no noble wars -- only noble warriors!

After a 4½ day weekend, I return to work tomorrow.  In a way, I'm actually kind of looking forward to it. 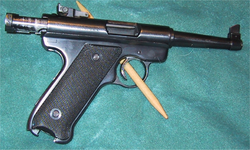