One of my Saturday morning indulgences is to read Lagniappe's Lair, written by a West Virginian on a variety of topics, often including the shooting sports, and classic Western movie clips on Saturdays, but mostly about the exploits of Lagniappe, a beautiful retired German Shepherd police dog with a colorful personality.

Of late, the posts have told how Lagniappe had begun losing neuro-motor control in his back legs to canine degenerative myelopathy, a progressive disease.  Still, his character showed through, even as his mobility impairment advanced.

This morning, I read, through tears, that the disease had advanced to an untenable state, and that yesterday his owner/friend, after sharing a long evening of conversation and treats, and a delicious last breakfast, took his beloved friend for an extended car ride and a final trip to the vet.

Four years ago this week, my wife and I took turns staying up with our Chow/Spitz mix, Sara.  As I had to work the next day, my wife probably shouldered more of the overnight duty than I.  On a crisp November morning, Monday before Thanksgiving, I drove through drops the windshield wipers could not clear away, to the veterinarian's office, to give rest to a dear family friend who in her fifteen years had greeted the births of all three of our children, and had stood watch to alert of any uninvited guests when I was away on business.

Rest in peace, Lagniappe.  With gratitude to all of our canine friends who have enriched and blessed our lives.
Posted by an Donalbane at 11:09 AM 12 comments:

Words of wisdom from the Gunner's Guru

"Personal weapons are what raised mankind out of the mud, and the rifle is the queen of personal weapons. The possession of a good rifle, as well as the skill to use it well, truly makes a man the monarch of all he surveys." - Jeff Cooper, The Art of the Rifle
Posted by an Donalbane at 8:07 PM 5 comments:

From the email bag today, from my friend Tom:

Is this really putting your best foot forward? Or a "High Miles" disclaimer?

For reasons I'm not quite sure I understand, I've not yet un-subscribed from the free interwebs dating service.  I haven't gone on a single date using that service.

Nonetheless, I still get emails notifying me of my latest "matches", and sometimes, possibly from sheer boredom, I check to see exactly who are these women that this e-Yente¹ believes will find romantic bliss with me.  As.  If.

This one has shown up on the list from time to time, and each time I get a chuckle from the unfortunate break, where the sales pitch cuts off and you have to click to read the rest of it:

In my spare time i enjoy spending time with my Family....Cookouts, Going to the movies, Some shopping but not TOO much, watching sports and going out every once in awhile with friends. Im a very laid...

¹ Yente, the matchmaker from Fiddler on the Roof
Posted by an Donalbane at 10:02 PM 4 comments:

Blockbusted: A tale of three cities

It's no longer front page news that Blockbuster, the once high-flying video content retailer founded in Dallas in 1985 and nurtured to national prominence by investor Wayne Huizenga, is on the ropes, having filed for Chapter 11 bankruptcy protection a couple of months ago.

In the areas that I frequent, there are at least three closed Blockbuster outlets, victims of a myriad of factors, probably including a flawed business plan/debt/inertia, changing technology delivery channels (NetFlix, FiOS, U-Verse), and competition from kiosks (RedBox) as well as traditional rental stores (Family Video).

What's interesting to me is to see how the market absorbs the detritus of the vacated retail spaces, almost always well-located.  Here are three: 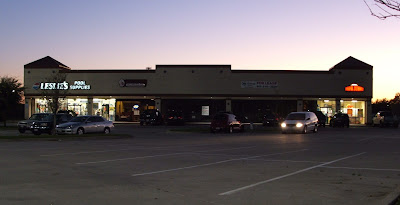 This location, the most recently closed, remains vacant.  In a retail center anchored by a Kroger grocery, two banks, and a fast food establishment, it's probably going to be a bit difficult to fill, if for no other reason than that its visibility is not so good as the other locations.  (Fun trivia: The property is represented by the Makens Company.  I rode in a carpool to prep school with Jim Makens in the 5th and 6th grades.) 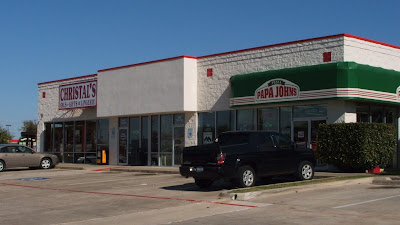 Notwithstanding my neo-Puritanical disapproval of the Toys for ----- retailer on the left (Oils, Gifts, Lingerie - "Uh, yeah, what do you have in a semi-synthetic 5W-30?"), I'm sure the landlord is tickled (no, the pun is unintentional, sort of) to have repurposed this space in a fairly short time. 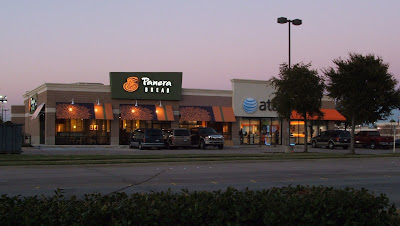 This store, in a retail center anchored by an Albertson's, and several fast food outlets, benefitted from a bold new façade, and in under three months was fully redeployed with two solid tenants.

I hope it doesn't shock any of you that I'm, uh, not a fan of the rap music.

You can attribute it to my age, my incredible likeness of being white, or simply a tragic case of the un-hip.  It's just not my thing.

Nonetheless, the praise band at my church performed this song at last weekend's service - the message was spot on:

And a transcription of the lyrics:


Uh, I know it’s going to kill me but I just can’t let it go
And the taste so appealing got a grip upon my soul
These honey dip lies mesmerize me

Pride’s got its crooked fingers twisted all inside me

Fools walk the path I’m on, never to be seen again

Sipping on seduction while we eating on some secret sin

And I know I should be over this, but I ain’t seeing clear

And I aint leaving here, unless somebody save me


Walking to my grave letting evilness enslave me

Her fabrical fabrication is fueling my fascination

Giving all my life away but I’m just so immersed in this (Killa)
Hook:
Baby this is innocent (Killa) it won’t even hurt a little bit (Killa)


Come on and let me in (Killa)

baby this is innocent (Killa)


And it won’t even hurt a little bit (Killa)


Close your eyes and let’s get lost tonight (Killa)
Would it be alright? You’ll see (Killa)

Verse:
Her feet go down to DEATH, so don’t let her consume you

Even though her heart is black, her exterior’s beautiful

She’ll take your life away, strip away your joy

My friends fell low, when they was so high

Got me running scared of myself, no lie

And I know I’m gon die, I tried cold turkey

But when I’m feeling worthy, Satan’s sure trying to merk me

I’m doing myself dirty, flirting with whats perverted
I should follow the word but I guess I’d rather be murdered
Excuse me I mean martyred ‘cause I’m killing myself
My sin conceived a baby, and we gon name her death, breath
(Gasps) - Taker, she take my breath away
Replaces it with poison and I’m so swept away

I need some bread today hope I wake up


Before they start my wake up somebody make me break up

Come on and let me in (Killa)

Baby this is innocent (Killa)

And it won’t even hurt a little bit (Killa)

Close your eyes and let’s get lost tonight (Killa)
Would it be alright? You’ll see (Killa)


As the song says, Sin is a Killa, insidious and seductive, leading us to spiritual and even physical death.  And while rap may not be my idiom of choice - I was totally enthralled by this song because of its powerful message.
A few years ago, Don Henley expressed a similar message in secular packaging, in Miss Ghost, a tale about running into an old lover, or perhaps metaphorically, an old habit, and realizing he's overcome the seduction.  I couldn't find a video, but here is a transcription of the lyrics.  The song's on the CD, Inside Job.
On a misbegotten, moonless night
I stumbled in my door
Disgusted with my circumstance
Soaked to every pore
When floating from my bedroom
Came a moaning and a sigh
“Oh, I've had one too many
It's just the wind,” says I

I lit up a cigarette
And I poured a good, stiff drink
You see, I needed to compose myself
I needed time to think
No sooner had I settled down
The moaning came again
Drifting through the silence
Like some otherworldly violin

I bounded up the staircase
I went slippin' and slidin' down the hall
You know, I've been around the whole, wide world
But I was not prepared at all
Uninvited visitor, unsuspecting host
“Well, I see you've made yourself at home.
Good evening, Miss Ghost.”

You're more beautiful than ever
I feel just like a kid
And I commence to trembling
When I think of all the things we did
Skin as pale as marble; lips as red as blood
Imagine my surprise, my dear
I thought that you were gone for good

You look so lovely lying there
All stretched out on your back
But I'm the one who's strung up here
On old temptation's rusty rack
And in the wee small hours
Is when I miss you the most
And I confess it, I have missed you
Ah, Miss Ghost

I threw open the window
And I howled at the rain
And I cursed the weakness of the flesh
This breath and bone—and this brute, reptilian brain

Way down beneath the surface
Far beyond the light of day
So many things lie buried deep
And baby, they should stay that way

Oh, my wicked, little habit
We've really made a mess
And everything's been trivialized
In our vain pursuit of happiness

And even though you've come for me
I won't go back with you
To some temporary heaven
Down some empty, dead-end avenue
But it's been so good to have you here
And I propose a toast“Here's to seeing through you—
Miss Ghost.”
Posted by an Donalbane at 6:43 PM 3 comments:

You mean those little ones?

Driving to work this morning, I glanced over at the service pickup in the next lane, which is emblazoned with the phrase  AAA Batteries Delivered and Installed.

My first thought, of course, was "How dang inept or lazy does a person have to be to hire their AAA batteries delivered and installed?" 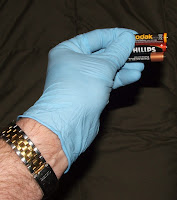 Really?
Turns out, they're installing AAA Brand, like the auto club, batteries, as I realized when I took another look at the truck. 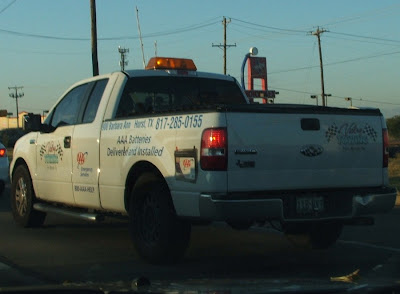 Bullets in the Gun

Here's something to start your Saturday.  I don't think it's Toby's best work, but what caught my attention is - what kind of music is this?  Not really country, not really pop.  Sort of outlaw-redneck country meets Chicago?